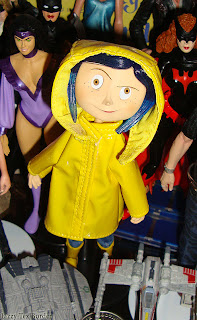 This is my 8 inch Coraline Jones figure by NECA. Coraline is a 2009 animated (I believe it is called stop-motion animation) movie about a girl who is not totally happy with her life and goes on an adventure. I really love Coraline and she is one of three Coraline figures that I have.
Posted by Lizzy Tex Borden at 1:38 AM