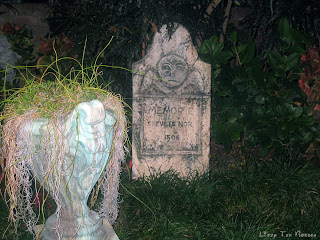 Here is a picture that my son took a few years back. A gravestone in the
cemetery at The Haunted Mansion at Disneyland in California. This is the
gravesite of "Snevets Nor". I am sure that most of you know that a lot of
Disney "cast members" are immortalized at the Disney parks and "Snevets Nor"
is/was apparently a cast member named Ron Stevens. Mr. Stevens worked for
WED (Walter Elias Disney) in the Haunted Mansion architectural department.
That is all that I have been able to find out about "Snevets Nor".
Posted by Lizzy Tex Borden at 12:03 AM