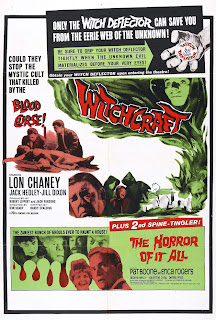 Way way back, a long time ago, in the land of before computers, wireless phones,
microwave ovens, Jack In The Box and color televisions being commonplace, there
was a movie called "Witchcraft" starring Lon Chaney Jr. It was double-billed with
"The Horror Of It All" starring Pat Boone. These movies were so freakin scary and
dangerous to view that theaters offered "Witch Deflectors" that you would keep on
your person during the show as protection against evil forces. 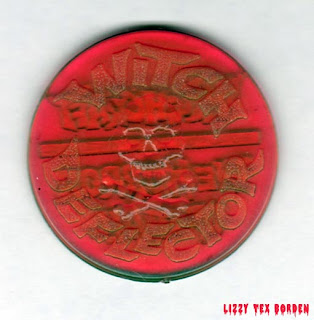 I have a Witch Deflector. It's a pretty cool semi-clear plastic coin about the size of
a fifty-cent piece. Unfortunately I just have a lousy scan of it. I would normally take a
picture of it, but I put the flyer along with the deflector in an envelope in a drawer
here-abouts and I can't remember which one. But anyway, they should start this
little fun trend again. Paranormal Activity Deflectors, Blair Witch
Deflectors, BORAT Deflectors.

WOW! i have never even seen one. what does it say on the other side? would this ever be for sale? its one thing i would love to have in my collection, right next to the 13 ghost view finder and the vomit bag from mark of the devil

Sorry. I did not see your comment until now. I am not real good at this blogger thing sometimes.... I wouldn't sell mine, but I have seen them on ebay. There is one on their right now under "witch deflector" for $17. I am not sure what is on the other side if anything. I am going to have to find that thing.

If you want a genuine Witch Deflector coin, check out eBay. Just put "witch deflector" in the search engine, and you'll find one available for a mere $15, postage included. Not a bad deal for such a rare item!

Thanks for visiting and for the tip Mr. or Ms. Unknown!