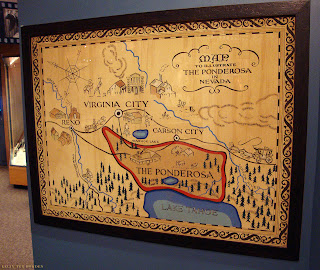 Here is another picture I took when I went to the Gene Autry Museum
of Western Heritage in Griffith Park, California (08/12). I am sure most folks
would recognize this map of "The Ponderosa" from the television
series called Bonanza (aired 1959-1973).
From the museum description: "Because the show was on the air so long and in so
many countries, it is possible that more people have seen this map than any other
map in history." I bet that is true. The map was designed by Robert Temple Ayres
in 1959 and was donated to the museum in the memory of David and Rose Dortort.
David Dortort was the creator and producer of Bonanza.
I left the photo pretty big so if opened in a new window it is easy to see.
Posted by Lizzy Tex Borden at 5:25 PM