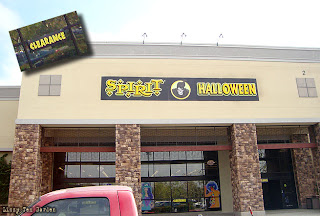 There's still a liiiiiiiittle Halloween left. I made my annual trek to the Halloween
stores to take advantage of their "Day After Halloween" sales. Everything is on
clearance at 50% off. I did get an early start. It was a bit overcast
at the Spirit Store today. 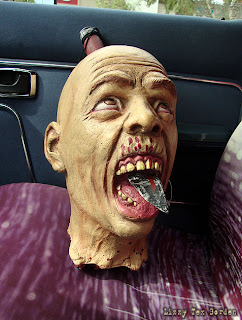 The place was pretty darn cleaned out. I don't know when it happens, but somebody
buys the Hell out of that place while I am not there. There were a couple of folks
there with basket loads of heads to purchase but I did manage to get the last what I
think is a good one. His eyes are awesome. I'm not disappointed. Someday I am
going to have some fun with all of this stuff. 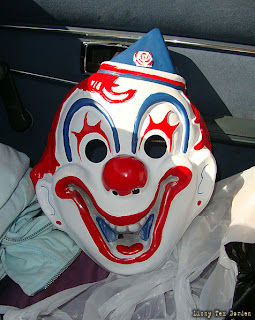 I also bought a Rob Zombie Halloween remake Michael Myers clown mask.
This mask is not totally movie accurate. I imagine that somebody somewhere
did not want to shell out some licensing bucks. But it is pretty dang close
to Michael's. I had seen this and wanted it the first time I went to the store in
late September, but I didn't want to pay the full price. I told myself that if they had
any left when they went 50% I'd buy one then, and they did and I did.
This year I didn't go to the Halloween stores as often as I usually do or wanted to.
I think that gas prices had a little to do with it. I only went two times. Maybe next
year will be better.
Posted by Lizzy Tex Borden at 5:44 PM