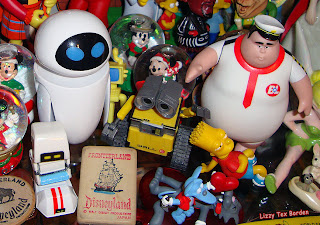 When the Disney/Pixar movie WALL-E was released to theaters in June of 2008,
Blockbuster (movie rental store) had these little figures for sale and I could not
resist them. The little guy with red racing stripes on the bottom left is M-O.
M-O is standing in front of the beautiful blue-eyed Extra-terrestrial Vegetation
Evaluator, EVE. To Eve's left (our right) is the star, WALL-E. And next to
WALL-E with outstretched arm is the Captain of the spaceship Axiom, B. McCrea.
I have a few other WALL-E figures too. I got the rest of them pretty much
at The Disney Store during clearance sales.
Posted by Lizzy Tex Borden at 1:43 AM