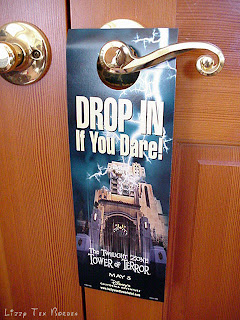 Before The Twilight Zone Tower of Terror officially opened it's
doors on May 5th, 2004 at Disney's California Adventure in
(where else) California, they sent out in the mail these door hangers
as a promo. At least, I think I received it in the mail. Maybe it was in the
Sunday newspaper or something, but I think it was the in the mail.
Posted by Lizzy Tex Borden at 1:44 AM