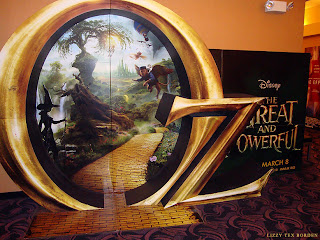 I went to the theater to see Steven Spielberg's "Lincoln". While there I spotted
this standee for the movie "Oz" to be released in theaters soon. I want to see this
one. It's going to be in 3D and it looks like it will be worth seeing it that way.
Anyway, I like these displays that make it possible for a person to become a part
of them for photographs if they want to. A neat trend me thinks. 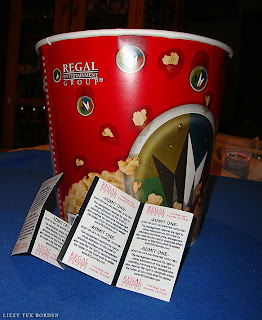 "Lincoln" was good. I could have waited
for the movie to come out on DVD or Blu-ray, but I am not
disappointed that I saw it in the theater. The damn movie
made me weepy. I did not think that a movie about Abraham
Lincoln would do that. And not for the reason you might be
thinking. Daniel Day Lewis's portrayal had me caring about
Lincoln, the man. I will leave it at that.

Lincoln is definitely not a popcorn movie, but speaking of popcorn...
I think after the last two nights of popcorn eating, I am a little
popcorn'ed out. But mum's the word. I do not want to lose my
Popcorn Club Card. My appetite for popcorn
will be in fine spirit in a day or two.
Posted by Lizzy Tex Borden at 12:04 AM