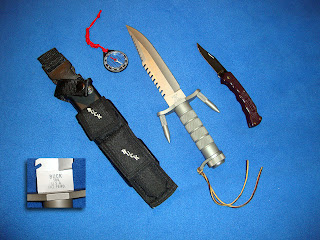 For my fellow cutlery fans, here is a knife that I bought blah blah
blah years ago. It's a Buckmaster 184. This knife was released during
the Rambo survival knife heyday. The knife is well made and
was touted by Buck Knives as the knife used by the Navy Seals. I
don't think that was actually true. These are now pretty much collector
knives as in all practicality, they are useless. LOL. I have a fondness for
this knife and would never sell it, but it is really not good for much.
It has never been used or sharpened and it has minimal blade wear from the
sheath. The Silva compass is stock. The compass sheath is stock but I bought
the larger knife sheath at a gun show. I keep an old Bucklite lockback
in that. I just read in a Buckmaster online forum about a guy that has
250 of these. You can see that some people love to collect them.
Posted by Lizzy Tex Borden at 1:06 AM