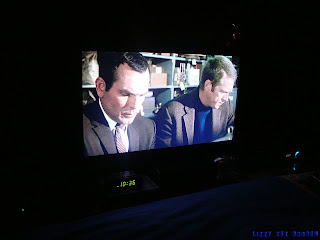 Playing tonight at Tex Cinema is Bullitt (1968) starring the one
and only Steve McQueen. Pictured above on the cinema screen is
Mr. McQueen (on the right, if I have to tell ya) as Lieutenant Frank Bullitt
and Don Gorden as Sergeant Delgetti, both members of the
San Francisco Police Department.

My dad and his wife took me to see this movie when it opened and I really
enjoyed it. So much so that I begged my mom and her boyfriend to take
me to see it again at the drive-in. So they did. But when we got there the
box office ticket guy said to us, "Sorry, we're sold out. Just drive on through
to the exit please." So we did. But on the way through we spotted an open
space and SCORE! Free movie.

Bullitt is notable for a spectacular car chase through the streets of
San Francisco (Steve McQueen did a lot of his own driving) that was just
awesome in the theater but pretty much just as effective on a  smaller screen.
If you are into car chases on film, this is a mandatory watch.

Steve McQueen was McCool. Everybody knew it.
Posted by Lizzy Tex Borden at 11:43 PM