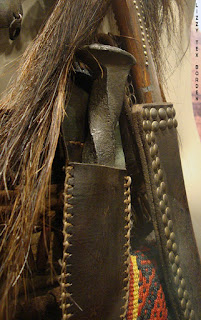 I just want to do a little follow up to an entry that I made
on Friday, February 6, 2015 about my 2014 visit to the
Autry Museum of Western Heritage. With regards to the
props from the movie "The Lone Ranger": About Tonto's
railroad spike knife I had written, "For all I know this knife
made from a railroad spike is made of plastic. It looks real
enough, but.... who knows." I have now found information
which was not provided onsite along with the costumes/props.

I was half right. The spike is made of rubber. And that's just
totally cool. The thing looks real. The sheath is made of leather. 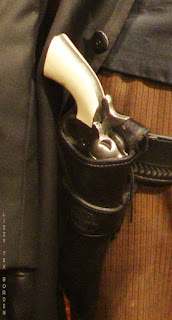 I had also written that I couldn't tell what brand of pistol The Lone
Ranger was carrying. Is it Colt? No. Is it Uberti? Nope. Is it EMF?
Nuh-uh. Cimarron? Wrong. Rubber? Bingo! The dang pistol is made
of rubber. It fooled me. Not all that difficult to do, but it got me. It is a
replica Colt single action, .45 caliber painted rubber pistol. So it IS
a Colt I suppose, kinda sorta.

Anyway, this was kind of long, but I hope it was a little interesting.
Posted by Lizzy Tex Borden at 3:30 PM