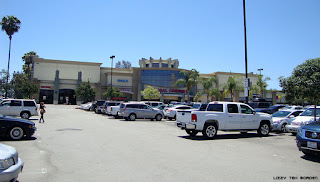 I went to the movies today. I had to park a' waaay out in
the boonies again. I took this picture as I was leaving.
When I got there at 10:30 in the morning all of those
empty spots were full. I think I can pretty much... 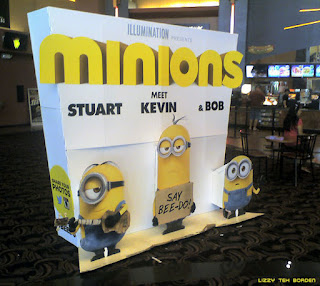 ...blame it on these guys. Minions had 'em coming in
in droves. I felt bad though when a couple with a little
boy in line in front of me were told that all the showings
were sold out. I hope that little guy gets to see it soon. 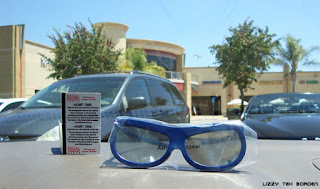 Anyway, Terminator Genisys. Rock and roll. It was fun.
A lot of people are not digging this movie and I have to
admit that it was kind of a let down as Terminator movies
go. But if I am looking at it as just trying to have some fun
at the movies? Success. But Jason Clark, enough of him.
Fun Fact: Arnold was right there in that Fat Burger behind
my glasses when San Diego County had the bad brush fires
several years ago. He was meeting with officials or some
such thing. I've written that before. 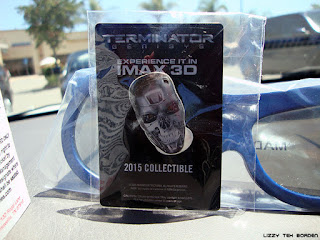 The nice girl at the ticket booth gave this great Terminator
Genisys Collectible Light Up Pin to me. Huzzah! Score!
This pin is so cool. As it turns out, these pins were given out
on July 1st opening day "while supplies last". Holy cow. They
must have a LOT of 'em. At any rate, I am very appreciative
to have received one of them. The Regal Theater chain rocks.

Oh yeah, with the free movie ticket I earned via the Regal
Movie Club, my 3D IMAX ticket was only $8. Nice.

I had another really nice day.
Posted by Lizzy Tex Borden at 5:14 PM