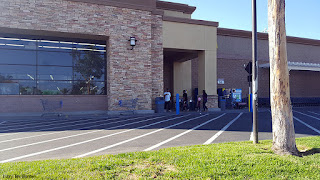 Will you look at how close I was able to park at Walmart
today? Now, I am no slacker. According to my pedometer
I walk an average of four to six miles a day at work. So
on my day off, sometimes I appreciate a little break.

And this is a little weird. This is the second season in a row
that I have stumbled across a clown mask that somebody left
laying around far from the Halloween costume section of the
store. Friday, September 18, 2015.... same thing. *gasp* 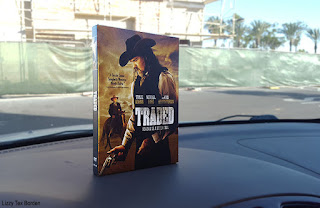 I bought "Traded" on DVD. I wanted to see another western because
you KNOW that I. love. westerns. OH MY GOSH this movie was
TERRIBLE. One of the worst westerns I have ever seen. Because I
have a certain amount of respect for Kris Kristofferson as a cowboy in
films, I am not going to go into it, but Kris, time to hang it up. I rate this
movie two out of ten whiskey bottles and they are each half empty, which
really only adds up to ONE whiskey bottle, but I am trying to be kind.

On the way home I passed under the bridge again and yes, people are still
dumping their trash here. It never ends. Kind of makes ya mad, no?