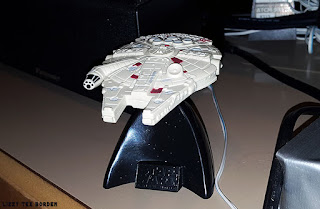 This is what I bought at Comics-N-Stuff on Thursday. Apparently
these Millennium Falcons were to be had at Taco Bell circa 1996.
They came with a "rip cord" that would fit into a hole underneath
the Falcon to be yanked out causing some sort of gyroscope action.

My Falcon did not come with the rip cord. I am good with that.
I think it looks cool just sitting there on the stand. The MF is my
favorite Star Wars vehicle followed closely by Snowspeeders.
Posted by Lizzy Tex Borden at 11:58 PM