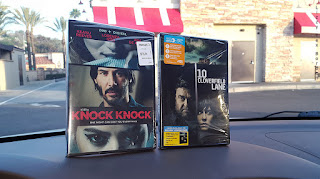 Another DVD day.
I bought "Knock Knock" with Keanu Reeves because I read
on some message boards I go to that it is a good one. I
was waiting for the price to come down. It did.

"10 Cloverfield Lane". What do I say, what DO I say? As a HUGE
fan of the original Cloverfield movie, I hated 10. HATED it.
It is a slap in the face to Clovie fans who waited EIGHT YEARS
for a sequel. I was never going to buy this movie. However (I say with my
tail between my legs), I am somewhat of a "completest", and this movie
is so bad that the price came WAY down, so I bought it to park next
to my "Cloverfield" movies.

This movie has a very very very small chance of redeeming itself a
very very very little bit if a Part Three came out and continued on
where this one left off. It just miiigggghhhht squeakily get by if it
manages to show where it ties in to the original movie.
MIGHT.
Some folks say it DOES tie in. They are reaching. WAY reaching.
From what they show, it does not tie in. It may be similar, but similar
is all it is. Do I sound bitter? I am.

One other thing: John Goodman. I LOVE JG. But I have seen him
in too many other things and just the sight of him kept taking me
out of this movie. Somebody slightly unknown would have been
better in his role. But that is just my thing.

I want more Clovie and many others do too. 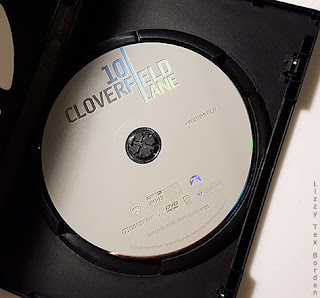 I guess it is no big surprise that they could not be
bothered to put any graphics on the DVD itself.
Posted by Lizzy Tex Borden at 7:26 PM