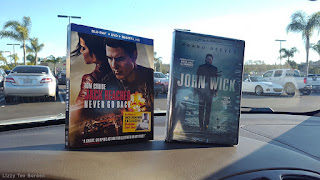 I bought "Jack Reacher: Never Go Back" and "John Wick".
Jack Reacher gets dumped on but I like it. Surrounded
by six guys who are big and tough, Jack asks them if they
"really want to do this" and they just start attacking him.
Forty five seconds later they are all on the ground and
Jack is walking away no worse for wear. Stuff like that.
I like.

John Wick... Man, this movie opens dark. Really dark.
But John is another badass and it goes from there. I liked
this one too. I want to see the sequel.

Both to me are totally worth checking out, if you like
badass guys and action.
Posted by Lizzy Tex Borden at 5:31 PM