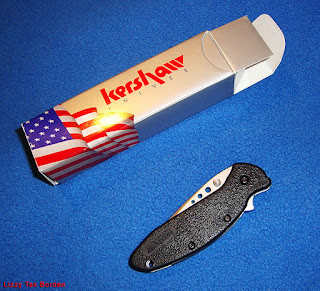 Knife Day at El Rancho De La Tex!
This is the Kershaw Scallion knife designed by Ken Onion.
I bought this knife in 2009. 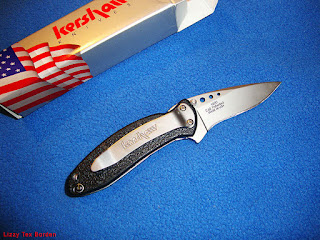 The steel is 420HC. Overall length is 5.75 inches with a 2.4 inch
bead-blasted blade. The closed length is 3.5 inches. The pocket clip
is in the position pictured and that position only. 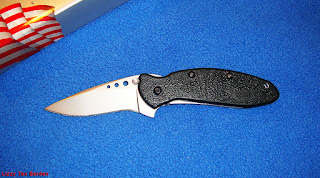 This knife has what they call their "SpeedSafe" assisted open.
Basically that means that you flip the blade open just a wee bit and
then the knife takes over and whips the blade out. There is also what
they call their "Tip-Lock" which is a little sliding button that
will keep the blade from flipping open on it's own. This is pretty
much why I stopped carrying it. Disengaging the Tip-Lock was
a pain in the butt. But I didn't want to carry it without the Tip-Lock
engaged for fear that the knife would open up in my pocket or
purse and would poke me when I reached for it. I just didn't care for it.

Kind of like carrying Condition One. Not my fav thing.

It also has a frame lock and frame locks mess with my nails (as I
have written before). So anyway, it is a nice little knife, just not
for me. It has traditionally been given rave reviews by most users.
Posted by Lizzy Tex Borden at 11:57 PM