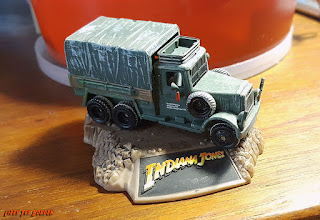 Here is something that I have had for some years that
is kind of fun. I have never even seen Indiana Jones and
the Raiders of the Lost Ark but I DO want to see it someday.
I want to pick up the entire series on Blu-ray...

This is a 3 Inch Titanium/Die-Cast Series Cargo Truck from
that movie. It was released by Hasbro in 2008 and is no
longer in production. It is about 3 inches long. 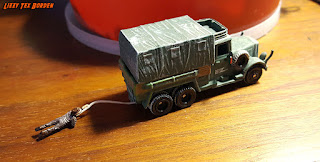 And this must be happening at some point in the movie.
Indiana Jones is dragging behind the truck.
That is dangerous, man.

Here is little Indy in action.
Someday I will know why he is doing this.
Posted by Lizzy Tex Borden at 9:56 PM