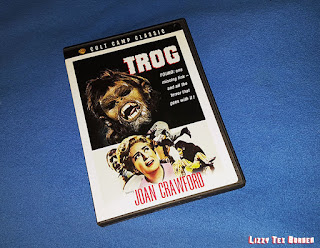 I watched "TROG" (1970) starring Joan Crawford. Ms. Crawford sold this
movie. If not for her, this movie would have been terrible. Ms. Crawford
herself considered this to be the worst picture she was ever in. But she
gave it her all and it pulled me in. This movie asked an interesting
question I think. TROG, a murdering "missing link" on one hand was
invaluable to science, but on the other hand was a nightmare to
a neighboring village whose inhabitants wanted him destroyed. 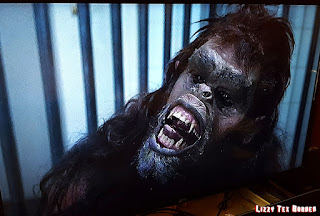 TROG onscreen at Borden Cinema. Fun Fact: TROG's suit is a prop from
"Stanley Kubrick's 2001: A Space Odyssey" (1968) re-purposed. I will
rate this movie 5 out of 10 Tranquilizer Pistols.

This was Joan Crawford's last movie.
Posted by Lizzy Tex Borden at 11:30 PM