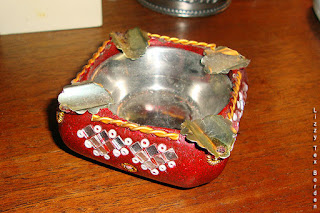 Several years ago a friend bought this ashtray for me
as a gift. It wasn't meant to be used as an ashtray. It was
to be used as just a cute little decoration which is good
because I don't smoke. And today is my Fifteenth Non-
Smoking Anniversary. I have not had a cigarette for 15
years this go around.

Yes, I did smoke for many years. I picked it up when I was
younger than I want to say. I quit once or twice for 5 years
or so at a time if I remember right. Things are kind of a blur
after a while. But now I don't even want to smoke at all.
I don't even ever think about it. For real. Not at all.

Not smoking is good. It is not the paradise that it is made
out to be. But I feel better than when I smoked, especially
at the end of the day.

All of that said, and as I have said before, I am always on
the side of those who smoke. Folks who smoke get a
raw deal. Anyway, 15 years... Huzzah!
Posted by Lizzy Tex Borden at 12:00 AM