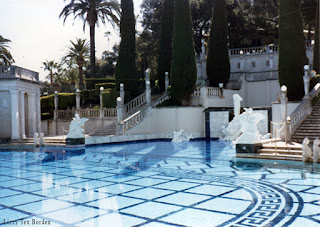 I've been to Hearst Castle in San Simeon a few times. This
photo of the Greek Pool was taken on my last visit in 1985.

When I inherit the Castle, I am going to build a rifle/pistol
range. I will also enlarge and bring the movie theater up to
date. Then I am going to throw a really great party.

I would have Dwight Yoakam as entertainment,
but I'm pretty sure I would not be able to drag
him away from the Billiard Hall. That would
be rude of me anyway.

Anyhow, not the greatest photo. I scanned
the picture I took with my film camera.
Posted by Lizzy Tex Borden at 11:55 PM