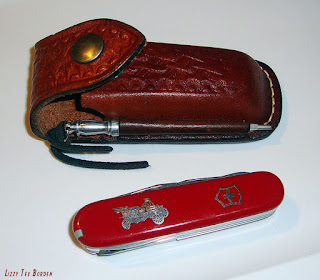 Once again it is Knife Day here at El Rancho De La Tex. Today
I am sharing a knife that I bought in 1984 at Santa Monica Place.
This Victorinox Swiss Army Knife model is called the "Motorist".
It has been out of production for quite some time. I bought the sheath
for it a few days later. That metal rod is a honing rod. This was actually
my very first for real quality well made knife. It marks that spot.
I have this really bad habit of taking knives that I like and locking them
away and never really using them. I did that with this knife. I mean, look
at that sheath. It is almost thirty seven years old. Yikes.
I goofed and did not take a photo of all of the blades and tools out, but it
is pretty standard. No corkscrew though. As I have written before,
I was never a fan of the corkscrew and I don't have a use for it.
This "Motorist" knife is very special to me.

This is the Wenger Swiss Army Knife that I am still carrying in
my bag or purse. I have been carrying this knife for over 15 years.

Besides all of the standard tools, this knife has PLIERS...
and all in a pretty compact package. Perfect for me.
Posted by Lizzy Tex Borden at 11:30 PM