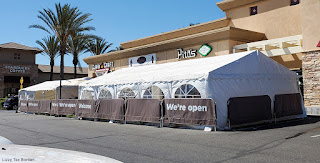 But I will tell you what, I would NEVER eat in this tent.
One drunk driver or "I mistook the gas for the brake pedal,
Officer" and you are the lead story on tonight's evening news. 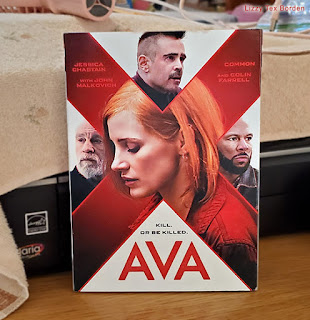 I have been really curious about "AVA". I know nothing about
it other than Jessica Chastain plays "a deadly assassin who works
for a black ops organization". That sounds cool. And I like Jessica
Chastain. Hopefully it will not turn out like Blake Lively in "The
Rhythm Section". She was the "assassin" who was afraid to off
anybody. Towards the end of the movie I was hoping John Wick
would come in a put her out of her misery.
The DVD "AVA" came a'way down in price. $5.00.

John Malkovich is great. I like Colin "I take myself SO
seriously" Farrell. And Common was really good in "John
Wick 2". We will see what he does here.

Will "AVA" make it onto my "Bad Ass Women" movie shelf?

"AVA" will squeak it's way onto my "Bad Ass Women" shelf.
The only problem with the action is that they use camera motion
to cover up for fighting moves that are not actually made.
Kind of cheating, unlike movies like "John Wick" that show
ALL the moves. But, at least she actually kills people.
I will visit this movie again.

I don't have a rating yet.
(P.S. They set the end up for a sequel and I hope
they make it. I don't think they will.)