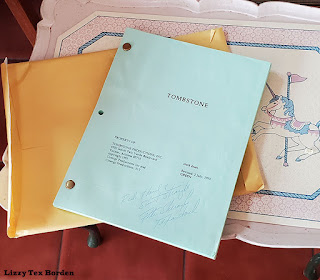 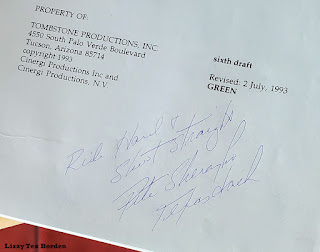 In about 1993 or 1994 I was at a gun show in Ventura California
looking at items on tables that were outside and in-between the two
buildings that hosted the show. I was pretty much alone out there.
On one of the tables I spotted this "Tombstone" movie script. Being a
HUGE fan of the 1993 movie I immediately picked it up and asked the
gentleman behind the table what he wanted for it. 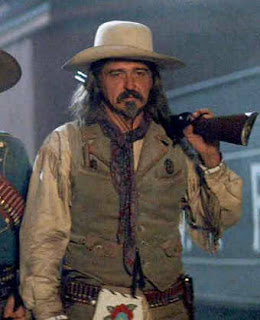 ~ Texas Jack Vermillion ~
At that point I realized that the man behind the table was none other than
Peter Sherayko who played Texas Jack Vermillion in the movie. He said, "If
you buy it, I will sign it." SOLD. I cannot even remember how much
I paid for it. I used to see him at a few shows, including the show in L.A.
at the Fairgrounds. I read that the shotgun Wyatt Earp (Kurt Russell) is carrying
in the movie, including the "And you tell 'em Hell's coming with me!" scene
was found and purchased by Mr. Sherayko AT the L.A. show. It was a Stevens
Three-Trigger 10-gauge Shotgun.