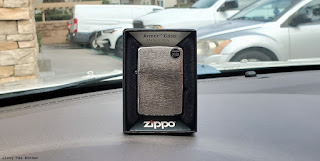 I bought a new lighter today. This is a practice run for my 2022
Birthday Extravaganza which officially starts next week. This
Zippo lighter is called the Classic Brushed Chrome model. The
sides are a high polished chrome and my fingers are able to grip
it a bit better than the one I have been carrying for two years
which has brushed chrome all the way around.

I think that was another of my famous long sentences.

Anyway, it's always fun to have a new lighter. Almost as much fun
as having a new knife, or pistol. ALMOST.

Oh, and according to the markings on the bottom of the
lighter, it was made in June of 2011.

Hi Liz, I hope you are doing well. I miss your comments on my youtube videos. I am going through them because one of my guest reviewers, Dan passed away in November from cancer and getting ready to do a tribute video to him.

Holy cow Rob... Dan passed away?? Terrible. So sorry to hear this.

Yeah, I watch your reviews. I should comment more. I have you linked on my site here... You have one of my favorite channels.

Again, so sorry to hear about Dan.

I will be sure to look for the tribute.

P.S. Thank you for coming by.