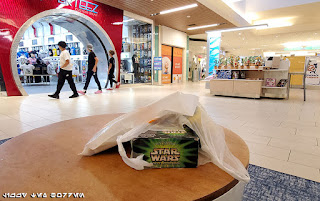 Uh oh. I feel a yearly Birthday Extravaganza tradition
coming on. Yep, for the last more than a year or two it
has been my tradition to buy some sort of Star Wars character
(historically from Comics-N-Stuff) that I am not opposed to
opening and putting on display behind my television monitor.
"So, what's in the bag, Goose?" 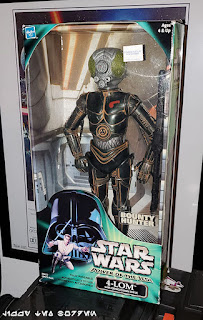 Last year my choice was between Grand Moff Tarkin and this
guy, FOR-ELLOEM. I went with Mr. Tarkin. THIS year, 4-LOM
was still there. THIS year, 4-LOM came home with me. Must have
been a lonely year for ol' 4-LOM. Well, he has a home now.
Who is 4-LOM? In a nutshell, 4-LOM is a "protocol droid who overrode
his programming and became a galactic thief and later a bounty hunter."
He is wielding his weapon of choice, a Blastech W-90 concussion rifle. 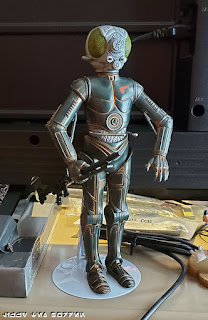 And here he is in all of his glory...