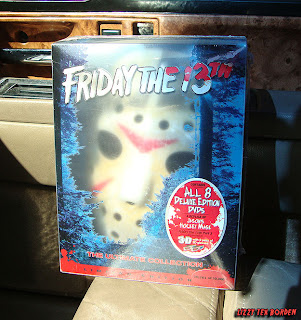 In keeping with the spirit of the month...
Although I have all of the Friday the 13th standard edition movies on
DVD, and the Deluxe Editions on DVD, and even though I am holding out for the
entire series to be released in a Blu-ray box set instead of picking them up
one at a time, I could not resist picking up this newly released Deluxe Edition
DVD box set limited to 50,000 copies. It comes with a collectible Jason
Voorhees hockey mask.The mask is small and not movie accurate, but it is pretty cool. The box looks just great on the shelf and I have no self-control.
Hey, I know this is boring to most folks, but somewhere out
there, there is an F13 geek (like myself) who is falling in love with me.