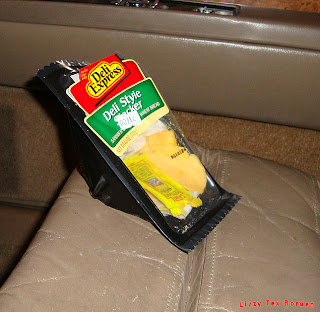 For lunch at work I usually buy chips and a Diet Coke
but today the chip machine was broken so I was compelled to
purchase something out of the sandwich/soup/whatevers machine.
This is something I had never done before. I bought a ham
and cheese sandwich.

The first thing I did was hunt down some mustard. The second thing
I did was eighty-six the American cheese. American cheese is just nasty
and these kind of snacks are nasty enough already. The third thing
I did was mourn two dollars and twenty-five cents. But hey, the sandwich
was not bad at all. The picture was taken after I was finished.

That was one Hell of a story, Lizzy.
Posted by Lizzy Tex Borden at 11:40 PM