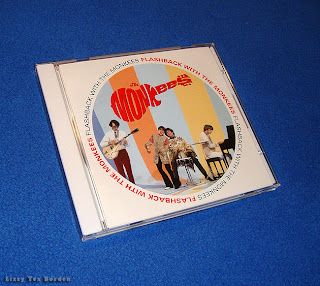 I still have all my Monkees albums. All original, all in great condition.
I watched The Monkees every week when they were on but I never got to
see them in person. But I did back in the day see The Monkeemobile
(or one of them) on a flatbed truck driving next to us on the 101 Freeway in
the San Fernando Valley. That was awesome (when "awesome" was BOSS).
I just a few weeks ago bought this greatest hits compilation so that
I could listen to them on my new Ipod.

At least a part of today for some of us is really, really sad. 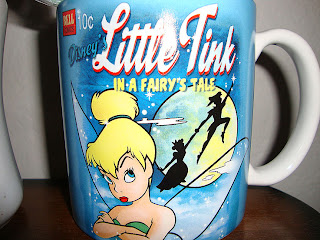 I have a couple Tinker Bell cups. This is one that my
mom bought for me when we visited the Disney Store.
I keep it on top of my dresser with pens and such in it.

I love Tinker Bell. She gets so jealous of the Wendy bird.
I also really like how deep down inside, Peter loves Tink.
Posted by Lizzy Tex Borden at 12:17 AM 0 comments

Last night I had a dream. I had a horse that looked almost
just like this guy. It was a wonderful dream. The kind of dream
that makes me sad and even a bit angry when I wake up and realize
that it was just a dream. It's the kind of dream that has stayed with me
all day and evening long. I called him Beautiful. I protected him
and he protected me. He loved me and I loved him so much. 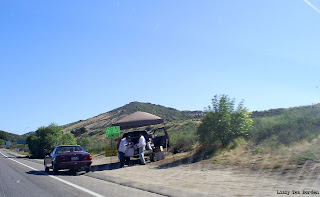 Not a very good picture, but I kind of like the country fruit
stand atmosphere. I took this through the windshield of my car
as I was driving by. Not everybody is lucky enough to live in
an area where this is something you have access to any ol'
time you want.
It looks like a nice lazy day.
Posted by Lizzy Tex Borden at 12:05 AM 0 comments 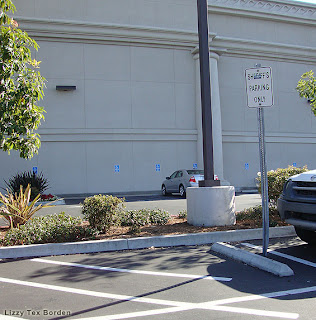 From what I know about retail, I'm guessing that these
dedicated for law enforcement parking places at Fry's Electronics
are not for officers who are dropping by to purchase a
transistor radio or two.
What a sad state of affairs.
Posted by Lizzy Tex Borden at 12:05 AM 0 comments 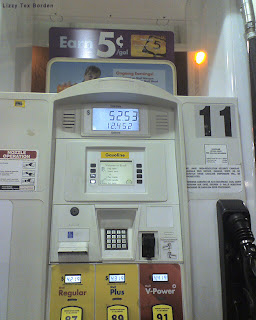 I filled my car with gas late tonight and all I can say is, really?

REALLY?
The fun part about this photo is that I can look at it again
in a couple of years and think to myself, "Man, I wish gas
was that inexpensive today."
Posted by Lizzy Tex Borden at 12:05 AM 0 comments 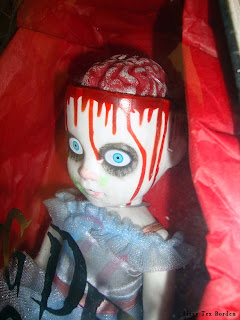 I collect Mezco Living Dead Dolls when I can (that means when
I find one on clearance usually). I just the other day bought "Goria".
I had my eyes on her for a couple of weeks and finally broke down
and bought her. She's 10 inches tall and has real cloth clothing. All of
the Living Dead Dolls are very detailed and never disappoint.
I don't open them so the photo of Goria is a little blury for that reason.
Posted by Lizzy Tex Borden at 12:21 AM 0 comments 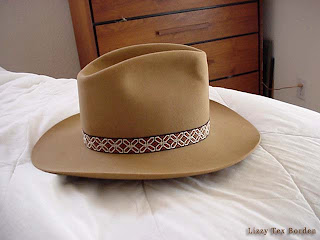 A couple of years ago I helped some friends move and
they were going to pay me for doing so. But as I was
packing up their stuff I spotted this Stetson hat and I said
to them, "If you let me have this hat, you can forget any
other compensation." Well, here is the hat. I'm not sure
what model it is, but it is semi-old school and it is awesome.
Thanks to Nancy and Burt.
Posted by Lizzy Tex Borden at 12:01 AM 0 comments 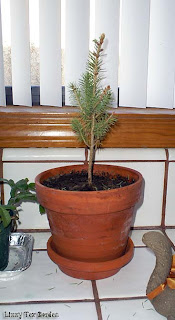 A few years ago when I bought my DVD of the movie
WALL-E, it came with a coupon for a free baby pine tree.
It's a "green" thing and if you've seen the movie, you know
how it ties in.
I got my little pine tree and here it is, right before it flippin died.
I felt like a murderer.
The weird thing in the lower right-hand corner is the
back end of a cement squirrel and not the front end of
a clay dinosaur that I might have made in the second grade.
Posted by Lizzy Tex Borden at 12:08 AM 0 comments 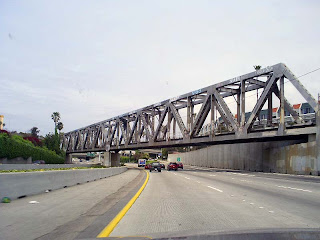 As I travel along the 101 Ventura Freeway going north
in Ventura, right before California Street I pass under this
railroad bridge. This section of freeway is also called The
Screaming Eagles Highway. The 101 highway that runs through
Ventura County honors the 101st Airborne Division, a division
that first fought in Europe in WWII.
And yes, this is a block from the Pacific Ocean and it often
seems to be a bit gray in weather around there.
Posted by Lizzy Tex Borden at 12:02 AM 0 comments 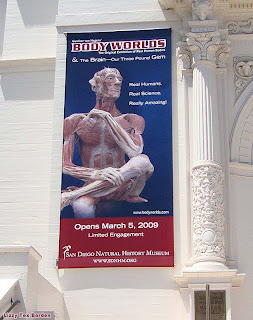 In July of 2009 I went to the San Diego Natural History
Museum to see a showing of BODY WORLDS. In the words
of the their website:
"BODY WORLDS is the original anatomical exhibition series displaying
authentic human bodies, willed by donors through the Institute for
Plastination’s Body Donor Program, and preserved using a process
called plastination."
The above photo shows a portion of the front of the museum and
the poster advertising the exhibition. It was something that wasn't quite
my cup of tea, but my cousin really wanted to see it and it was to be her
only chance to do so, so we gave it a go. It was quite interesting and it didn't
encourage me to faint like I thought it would. The only section that I passed
on was the one with babies. That was too much for me.
We weren't allowed to take pictures inside so I don't have any. A Google
image search on the word "Plastination" will bring up plenty from inside
the museum if you are interested in a gander.
Wo. That's more than I wanted to write.
Posted by Lizzy Tex Borden at 12:01 AM 0 comments 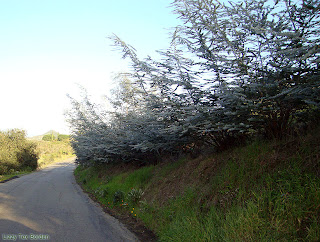 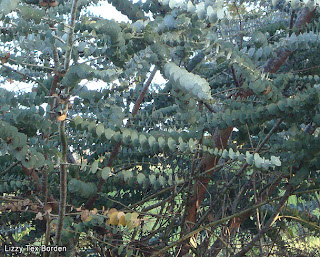 This is grown around the hills here as a flower arrangement
filler. I believe it is called "Eucalyptus Stem". It's interesting
stuff that I bet lots of folks have seen in arrangements, but never
in the ground.
I think it's a pretty unique looking plant.
Posted by Lizzy Tex Borden at 12:05 AM 0 comments 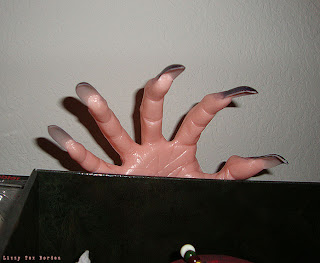 Wo. What's THAT peeking over some of my stuff?
A spooky hand. With some major nails.
I know. I'm 10.
Posted by Lizzy Tex Borden at 12:26 AM 0 comments 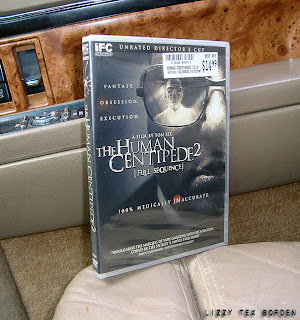 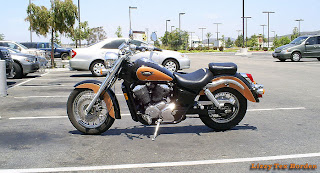 I don't know diddly about motorcycles and I don't really want
to know about motorcycles. But when I saw this one
I thought it was real purdy.
Posted by Lizzy Tex Borden at 12:30 AM 0 comments 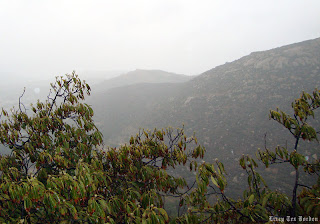 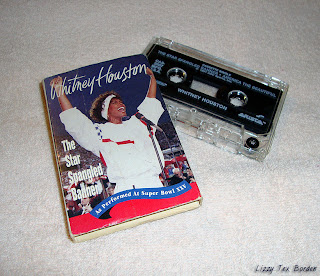 Whitney Houston performed The Star Spangled Banner at
Superbowl XXV on January 27th, 1991. I have never in
my life heard a more beautiful and perfect rendition. This is a
cassette tape that I bought of that performance. If you have not heard
Whitney's version, search for it because you are missing out.
Whitney Houston
1963 - 2012
~ Rest In Peace ~
Posted by Lizzy Tex Borden at 11:34 PM 0 comments 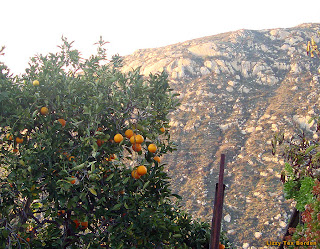 How about a nice orange from one of my mom's
trees? Did you know that Merriam-Webster defines
an orange as a a "globose berry with a yellowish to
reddish-orange rind?"
I kind of lost my appetite for an orange. I think it's a
"globose" and "yellowish" in the same sentence thing.
Posted by Lizzy Tex Borden at 11:39 PM 0 comments 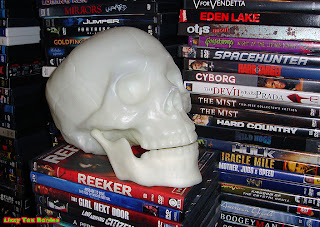 Here is another of my many beloved skulls. I think
I got this guy at Target. He's the only skull I have with
no markings or highlights or anything and that makes him
a little unique in my collection.
And he glows really really good.
You are once again soooo jealous.
Posted by Lizzy Tex Borden at 11:21 PM 0 comments

In honor of Madonna's most excellent halftime performance
today at Super Bowl XLVI (a game that I did not see as I was working
and wouldn't have watched football anyway) that I saw on the Internet
tonight, I have a picture of a gift that was given to me in 1992
during the month it was released. This is Madonna's book
entitled "SEX". It is pretty much a collector's item these days and
the photos inside are beautiful if you like Madonna, which I of course do.
The books are serial numbered, but I have no idea how many were
produced. The book apparently received much negative reaction.
I say joke 'em if they can't take a.....
Posted by Lizzy Tex Borden at 11:46 PM 2 comments 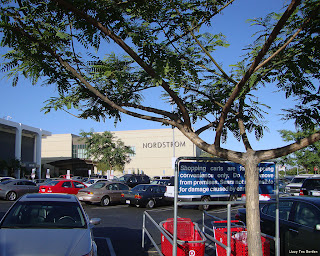 Where SEARS meets NORDSTROM at what will always be
known to me as Topanga Plaza. The Plaza is at Topanga
Canyon and Victory Blvd in Conoga Park, California.
Topanga Plaza opened July 10th, 1964 and was California's
first enclosed shopping mall. This mall brings back a lot
of memories for me.
This is just kind of a random picture I took when I was
there last July.
Posted by Lizzy Tex Borden at 11:26 PM 2 comments 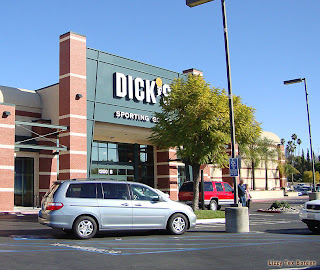 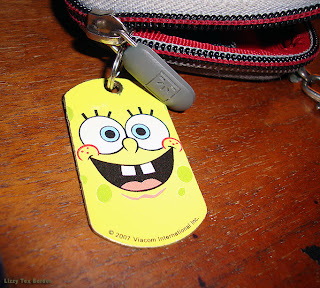 Who lives in a pineapple under the sea?!
Whenever I buy a new digital camera (not very often) or
change the case I keep it in, I put this SpongeBob dog tag
on it. I bought this tag some years ago from one of those vending
machines at Walmart. It has my name imprinted on the other side. 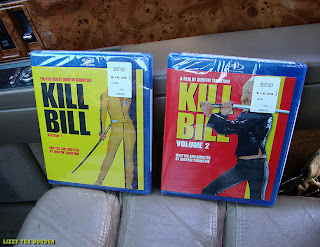 I was waiting for the Kill Bill Blu-rays to go on sale
again and they finally did at Best Buy, so I bought them.
I didn't (and wouldn't) pay the $16.99 sticker price that is on
them. The Kill Bill movies are a lot of fun and I am really
happy to have them.
"Pai Mei taught you the five point palm-exploding heart technique?"
Posted by Lizzy Tex Borden at 10:35 PM 2 comments