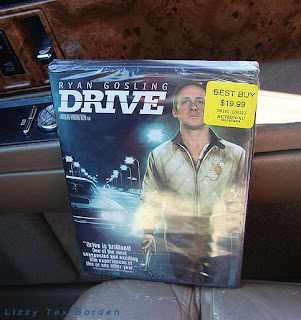 I finally bought a copy of DRIVE starring Ryan Gosling. I've
been hearing that this movie was one of the best of 2011. But I
didn't want to pay $19.99 so I waited until I got a Rewards coupon
and then made my move on it. It was a pretty darn good movie. I
didn't think that Ryan was going to do anything for me, but he did.
He was good. It's kind of artsy-craftsy too which I didn't expect.
Ron Perlman, Bryan Cranston and Albert Brooks all give great performances.
The interaction between Carey Mulligan and Ryan Gosling totally tugged
at my heart strings. I thought I was just going to see action, not get the
weepies. I hate the weepies. It gives me a headache.
I am not a love story type of person.

But I do recommend this movie. More good action and story than weepies.
And hey, it takes place all around Los Angeles and the San Fernando
Valley, and they actually filmed it there. You gotta love that. L.A. has
become so industry unfriendly, it's good to see it happen again.
Posted by Lizzy Tex Borden at 11:35 PM