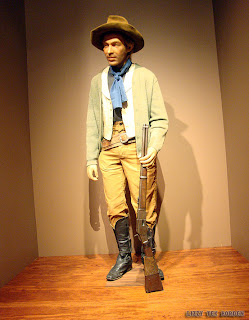 ...another from my Gene Autry Museum of Western Heritage visit.
This is William H. Bonney who was born William Henry McCarty, Jr.
but known to most folks as Billy the Kid. Legend says William killed 21 men
before he himself was gunned down by Sheriff Pat Garrett at the age of 21. But
his kills were likely closer to 4 to 9.

This guy doesn't look a whole lot like the photos I've seen of Billy (he looks more
like James Coburn to me), but that is supposed to be his actual rifle which I
believe is a Winchester 73' which was his favorite model.

I really liked your blog. Good luck and until new appointments