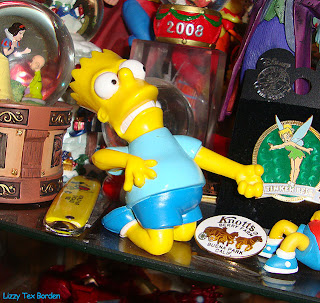 The other day I spotted this cool little Bart Simpson
playing air guitar. He was just kind of sitting there by
himself and was only a few dollars so I brought him home.
The date on him says 1999 and he's made of that solid
hard/soft plastic stuff.

I can hear him saying, "C'mon Homer! Drums man, drums!"


On Tuesday, March 20 of this year I had posted a photo of
a waterfall running down some steps at Balboa Park in
San Diego, California. Well, it's so warm here today I
decided to try and cool off a little by putting that photograph into
motion. It's a very short video, all my videos are short. But
I am liking the fantasy of walking barefoot in that water.