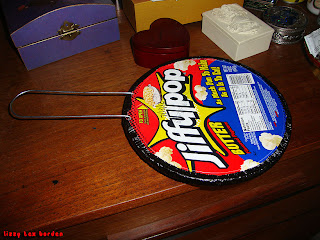 I think Jiffy Pop is the best popcorn you can make for home movie viewing. When I was little my mom and dad use to take me to the drive-in. We used to go to quite a few different theaters but my favorite was the Olympic Drive-In on Olympic and Bundy in Santa Monica. The street side of the screen had a huge mural of a guy and a girl surfing the waves of Santa Monica, or Malibu, or Zuma or wherever on it. This drive-in was torn down in maybe 1974 and a Cadillac dealership took it's place. 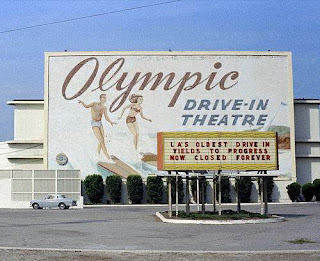 The above picture was in the Santa Monica Evening Outlook
newspaper along with the story of the theater's closing
When we would go my dad would pop some Jiffy Pop, put it in a covered metal container and wrap that in one of the quilts that my great grandmother made (my great grandmother came out West in a covered wagon I am told, so these were some serious quilts don't ya know) and we would have warm popcorn at the movies later on in the evening. We never did the snack bar thing for some reason.