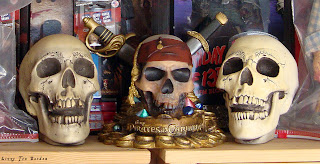 That middle skull with the swords behind it is a bank I bought at the
Disney Store just after the first (I think it was the first) Pirates
of the Caribbean movie came out. It's a bank. When I spotted it
in the store I was like, "Should I? Shouldn't I? Should I? Shouldn't I?
I shouldn't. Should I?" But I did and years later I'm glad I did.
I think it's cool.
Posted by Lizzy Tex Borden at 11:51 PM