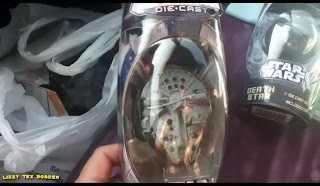 Yep, went to the mall today for a little R&R and got a really good
deal on a couple of Star Wars Titanium figures/vehicles. The first one
was one that I really wanted to have. It's a "battle ravaged" Millennium
Falcon, my first or second favorite Star Wars ship. I had thought the supply
of these guys were gone as they usually sell for much more than I paid.

The second one that you can kind of see in the back is a Death Star, another
awesome ship/station that I thought was history. Hoo-rah! I took the picture
with my not so great iPod camera.
Posted by Lizzy Tex Borden at 8:59 PM