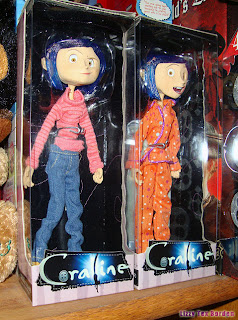 Back in 2009 I had seen these Coraline figures at an FYE store
and thought they were totally cool. I bought them before seeing
the movie. When I did get a chance to see the movie, I was hoping
that I would love Coraline so that I would appreciate the figures
even more. I did. Coraline is really cool. Cute and cool.
Posted by Lizzy Tex Borden at 4:19 PM