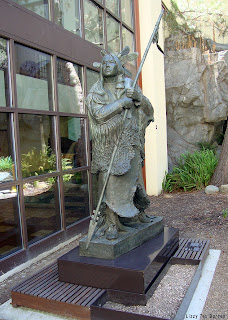 A photo from my 2012 trip the the Autry Museum of
Western Heritage in Griffith Park, California. This is a
bronze statue of Crazy Horse. He was an Oglala Lakota
leader who fought against the U.S. Government for encroaching
on Lakota territory. In 1876 Crazy Horse joined forces with
Sitting Bull to defeat George Armstrong Custer's Seventh
Calvary in the Battle of Little Big Horn.
This statue was created in 1997 by Richard Greeves who was
born in the United States in 1935. The statue was purchased for
The Autry in 2009 (from what I can figure out). It is located
out on "Trails West".