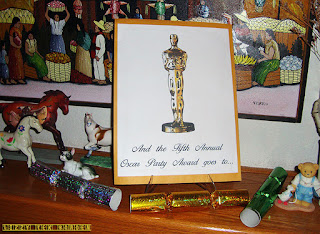 Before I got a job that totally interferes with my personal
life, I used to plan Academy Award parties for my family.
I would print out the ballots, we would keep tallies during
the ceremony and at the show's end the person with the most
correct choices would win a prize.

The above shows a photo of the envelope containing that year's
winnings. When the show was over we would have our own
ceremony with an official reading of the contest rules and to
announce the winner and rejoice and whine about losing and
generally have great guffaws. I believe that this year's envelope
held a $20 bill and some other little things.

One contest that I never got to do was to have everybody guess
who they thought would win, and then when it was all over, spring
upon them that the most guesses WRONG would win. I might still
do that someday.