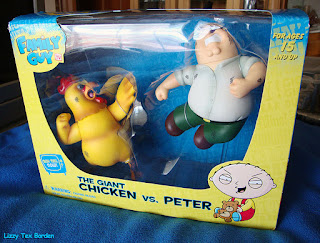 Family Guy's The Giant Chicken vs. Peter. A Mezco figure
that depicts a running joke of sorts on the television show.
I bought this figure seven or eight years ago. I wish I could
set it up as the stand is cool, but it would require more room
than I have.
Posted by Lizzy Tex Borden at 9:30 PM