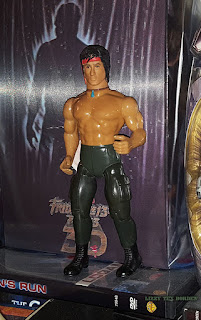 "They drew first blood, not me." 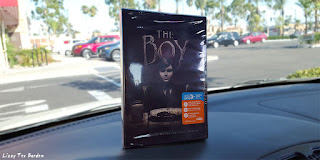 I finally bought "The Boy" on DVD. It came down in price
quite a bit. Been waitin' for that. People have dumped all OVER
this one, but I still want to see it. We shall see how it is.

They dumped on Annabelle 1 as well, but I liked that one okay.

P.S. I like the picture on the DVD cover, that food.
I wonder if the doll eats that.

Okay, I watched "The Boy". This is one of those movies that
you just cannot say much about, or you will give it away. That
said, I am going to say that it kept me entertained, it gave me
the willies in a spot or two, I did not see what happened coming
(and that may be because I am an amateur), and it was worth
watching. I will rate "The Boy" 5.5 out of 10 Peanut Butter and
Jelly Sandwiches. Don't pay more than $7.50 for it. 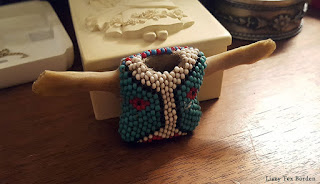 Years and years ago my mom and her husband were on a
trip somewhere (I cannot remember where), and she bought
this scarf slide for me. It must have been my kind of place
they were visiting because... 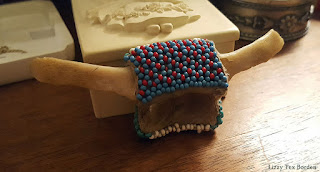 ...this slide is really beautiful. The beadwork is great and has held up
for years. I THINK, I'm not certain, but I THINK that the bone
is some kind of animal vertebrae. That's what it looks like to me.
But with my limited knowledge, I could be totally
wrong (most likely). I really wish I knew more about it. 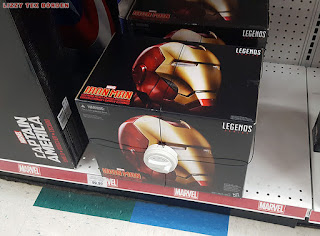 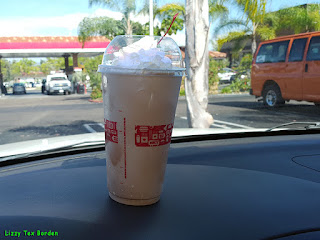 I craved a chocolate shake and for the first time since
Monday, July 14, 2014 I treated myself to one at
Jack in the Box. Does this not look goooooood? It was good. Too good. Real too good. It was too big too.
I drank it all. Big mistake. It was just too much for me and
I was sick the rest of the day and night. Dang it was good.
But I felt so terrible that it will be a good long time until I
have one again and when I do? It will be SMALL.
Posted by Lizzy Tex Borden at 11:34 PM 0 comments 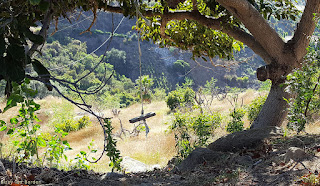 Somebody tied a swing to their tree.
Posted by Lizzy Tex Borden at 11:00 PM 0 comments 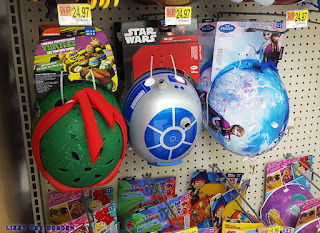 All those years ago when I first saw
"Star Wars: Episode IV - A New Hope"
at the theater, I never thought that I would
be standing here in 2017, SO many years
later looking at stuff like this.
Posted by Lizzy Tex Borden at 11:43 PM 0 comments 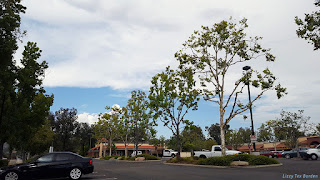 A beautiful day to sit in the car, listen to
the radio and enjoy a pizza lunch.
Posted by Lizzy Tex Borden at 9:30 PM 0 comments 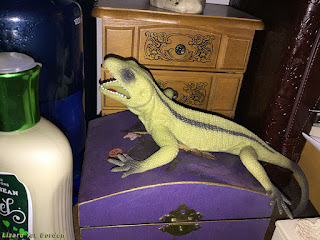 This boy gets around.
Posted by Lizzy Tex Borden at 2:08 AM 0 comments 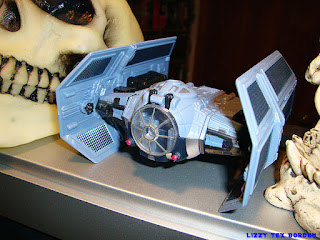 This is my Star Wars Transformers Crossovers
TIE Fighter/Darth Vader. 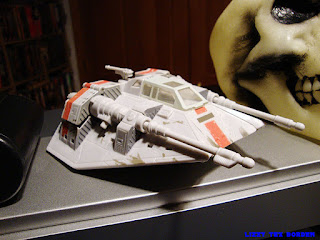 And this is my Star Wars Transformers Crossovers
Snowspeeder/Luke Skywalker.

Both are by Hasbro and both transform from vehicle to the respective
Star Wars character. I bought them about eight years ago because they were
all I could afford in a larger than small Snowspeeder and TIE Fighter.

I have never "transformed" them. I am afraid that I would never get them
back together again. I think you can still buy these, but they are out of
production, pretty sure.
Posted by Lizzy Tex Borden at 11:48 PM 0 comments

Just a day in the life of a Glacier ice/water machine.
Posted by Lizzy Tex Borden at 11:30 PM 0 comments 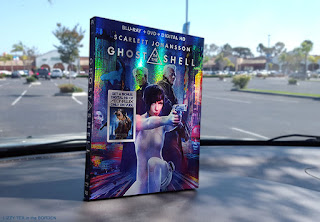 I bought "Ghost in the Shell" starring Scarlett Johansson.
I had seen this in the theater and I thought it was fun.
It's too bad that my beloved Borden Cinema is currently
having much difficulty playing Blu-ray disks to the point
that it is unable to read them at all. I am not quite sure what
I am going to do about that, but this version comes with a
DVD as well, so I am good for this show.
Posted by Lizzy Tex Borden at 10:30 PM 0 comments 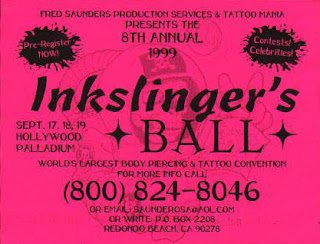 Years ago when they use to have them, I liked to go to
the Inkslinger's Ball held annually at the Hollywood Palladium
in...... Hollywood. They would host tattoo artists from all
over the world during the three day run. Inkslingers
who you would only see in magazines would be there and if
you were lucky you would be able to book some time with
your favorites, IF... you were lucky. They were usually booked
ahead of time and doing work for daily contests which in turn
would pay off, win lose or draw, in more publicity for them.
Anyway...

They had some great jewelry there. I bought some really cool stuff
there on occasion and unfortunately for me, I lost some really nice pieces
in a motel incident that shall remain a distant memory. One item that DID
survive some crazy times was this skull and crossbones concho in sterling
silver. Now to some this design may be a hair controversial (unbeknownst
to me at the time of purchase). But to me this concho is about pirate
and nothing BUT pirate and always will be.

I think that it is a great piece and it just gets better with age.
Posted by Lizzy Tex Borden at 11:30 PM 0 comments 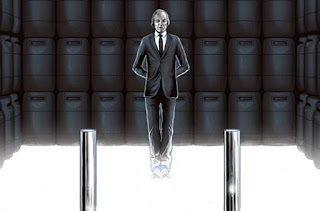 Also,
If you have ever seen the movie "Phantasm"... 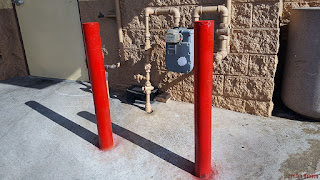 ...you will always walk AROUND these two posts
and NOT between them.
Posted by Lizzy Tex Borden at 11:31 PM 0 comments 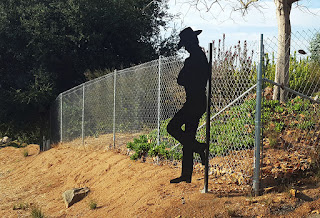 A day or two or three ago I found a new incense burner at
Walmart. This one was only five dollars. I like it. 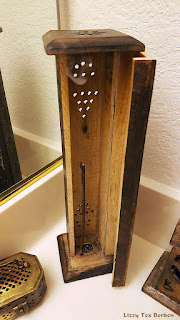 It burns stick incense unlike my other burners. It's fun
to burn sticks for a change. They burn longer than the cones.

The door on this thing creaked like The Black Pearl when I
opened and closed it and I was afraid that it would stress the hinges
to the point of breaking. So I went into my personal tool chest,
pulled out a little file I bought and filed the top and bottom
of the door a bit. Now? Smooth baby, smooth.

I have added "carpenter" to my resume.
Posted by Lizzy Tex Borden at 11:47 PM 0 comments 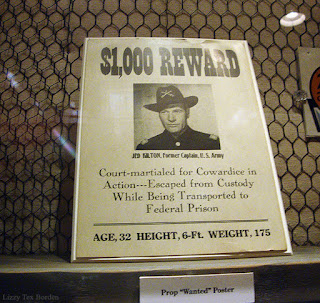 This is a picture from my 2010 visit to the Gene Autry
Museum in Griffith Park, California. This is a prop "Wanted"
poster from the movie "The Big Bonanza" (1944). Pictured
is Richard Arlen who stars as Jed Kilton, a Captain in the Army
who escapes from prison after being falsely court-martialed
for cowardice. 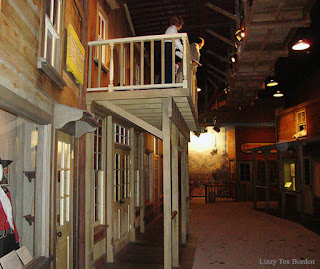 Anyway, this item is no longer on view as it was in one of the
window displays here on the "Western Street Sound Stage"
section of The Autry, and this was
dismantled about four years ago.
Posted by Lizzy Tex Borden at 10:00 PM 0 comments