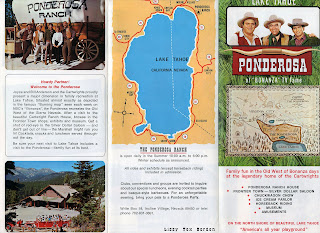 Kind of a follow-up to yesterday's Bonanza post.
I have one more brochure advertising the Ponderosa
Ranch at Lake Tahoe. I left this one really big so
that the photos are able to be opened in a new window
and they can be seen pretty well. If you are a Bonanza
fan and have not seen these pictures before they are
kind of fun. 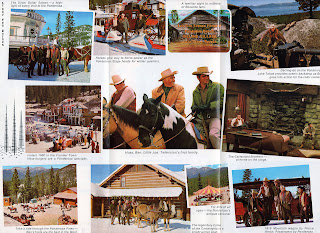 I wrote yesterday that
the Western Street scenes were filmed at Paramount
Studios in Hollywood. It is easy to see that the town
featured in these photos is not the Virginia City seen
on the show.

The look on Michael Landon's face as he is sitting on
his horse Cochise is CLASSIC Little Joe.

I also remember that they were selling in one of the
town's stores the model of hat that Hoss wears. It seems
everybody wanted one when I was there. I don't
remember how much they cost or if they were a well
made brand name hat, I just remember that a lot
of folks wanted one.

Bout it for today.
Posted by Lizzy Tex Borden at 11:00 PM