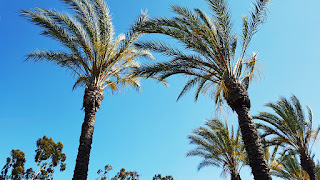 Just a beautiful last day of May, 2018,
during my weekly errands, looking up,
from my Subway sandwich lunch.
Posted by Lizzy Tex Borden at 11:30 PM 0 comments 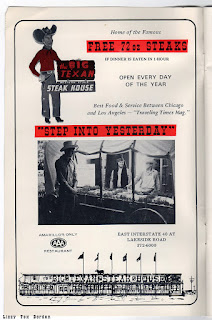 From the "Amarillo This Month, August 1970" pamphlet
I picked up in Texas, here is an ad for the Big Texan
Steakhouse. This place is still there and I still want to visit.
I've unfortunately never had the pleasure. However, I will pass
on the "Free 72 ounce Steak if Dinner is Eaten in One Hour" deal.
I can put good food away, but my limit is pretty much 71 ounces.

They still offer that deal and I think now-a-days they even have a
webcam that they turn on if somebody takes the challenge. Now we can
watch it from home. Anyway, someday I hope to go there. I left the scan
pretty big, so if you would like to open it in a new
tab you will see it better.
Posted by Lizzy Tex Borden at 11:27 PM 0 comments

Update on momma rat.
I don't know what is WRONG with us because this
rat should be GONE. But nope. Here she is with
her babies resting comfortably surrounded by the
remnants of some great snacks that we have NOT
been giving to her. Ultimately this gal has GOT to go.
Posted by Lizzy Tex Borden at 2:31 PM 0 comments 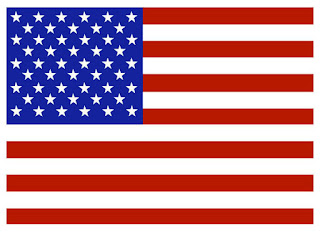 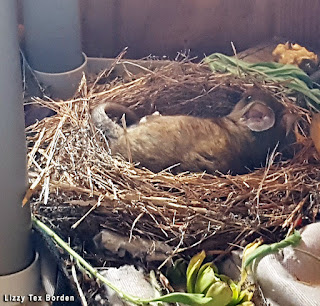 A soon to be a momma rat set up shop
in our shed. This rat's future is up in the air.
Posted by Lizzy Tex Borden at 11:56 PM 0 comments 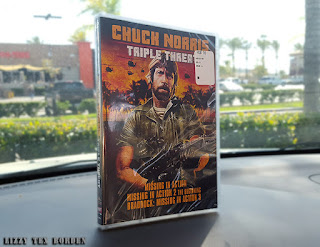 I bought the Chuck Norris Triple Threat DVD over at Walmart for
just $5.00. The movies included are "Missing in Action" (1984), "Missing
in Action 2: The Beginning" (1985) and "Braddock: Missing in Action III"
(1988). All three movies are on one DVD. I have watched Missing in
Action so far and the quality is fine. These movies are great 1980's fun.
They are no better or worse than you would think they are.
Hey, it's Chuck Norris. That DVD cover is epic. 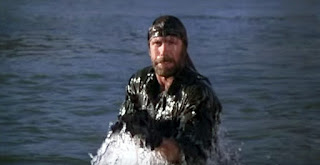 When Chuck Norris pops up from under water unloading a barrage of
7.62x51mm NATO rounds from a fully automatic M60 machine gun,
you know you are in serious Missing in Action territory.

Fun Fact #1: Chuck Norris does not do push ups.
He pushes the earth down.

Fun Fact #2: Chuck Norris was once bitten by a venomous cobra.
After five days of excruciating pain, the cobra eventually died.
Posted by Lizzy Tex Borden at 11:23 PM 0 comments 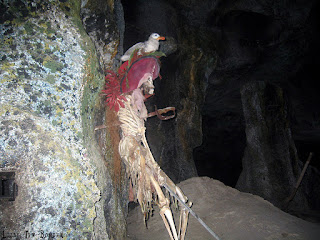 If you have ever been on the Pirates of the Caribbean ride
at Disneyland in Anaheim California, I am sure you will
recognize this guy. My son took this picture circa 2003.
Posted by Lizzy Tex Borden at 10:38 PM 0 comments 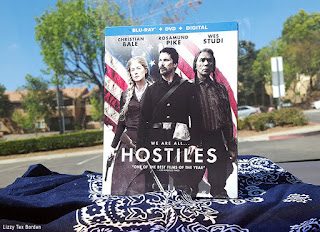 I FINALLY got my hands on a Blu-ray copy of "Hostiles".
I went to see this movie in the theater and I had mixed feelings
about the story, but overall I liked the movie a lot. When Hostiles
was in the theater, people were dumping on it all over the place.
Either that or they were ignoring it. But when the movie came out on
Blu-ray on April 24th do you think I could find a copy? Nope.

Well today Walmart finally had one, and when I say one, I mean ONE.
And I am really happy to have it.

I do recommend this movie.
Posted by Lizzy Tex Borden at 11:30 PM 0 comments 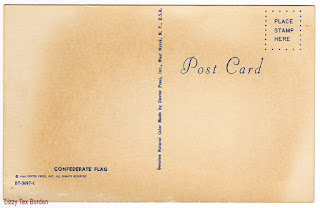 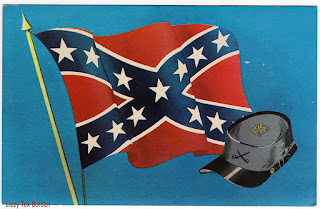 I got it somewhere around that time in
I think Missouri or Virginia.
Posted by Lizzy Tex Borden at 11:19 PM 0 comments 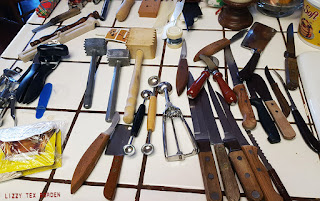 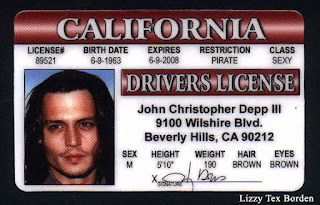 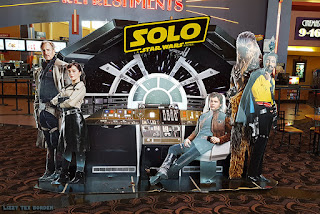 When I went to the movies yesterday they had this display for the
new Star Wars movie "Solo" that will be released soon. This is one
Star Wars movie that I am probably not going to see in the theater.
This movie just doesn't feel right. I will buy it on Blu-ray, but I am
99% sure that there will be no theater viewing for me.
I do hope that the movie does well.

I could not get a good picture of this pretty ravaged looking
display because it was facing the door to the outside and the glare
could not be avoided.
Posted by Lizzy Tex Borden at 11:30 PM 0 comments

I went to see "Avengers: Infinity War". Another good one.
The way they left it.... Well, I cannot WAIT to see the next
chapter in this series. The direction this movie took is like
the poster for the "Texas Chainsaw Massacre" (1974)
asked: "Who will survive and what will be left of them?"
We need the next movie... soon.

The Avengers lapel pin you see there was given to me by
a friend and I proudly wore it today for my boy Tony.
Posted by Lizzy Tex Borden at 11:34 PM 0 comments 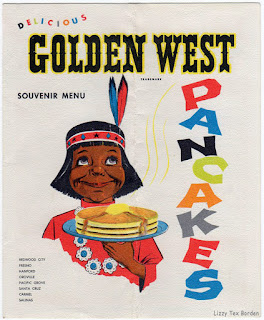 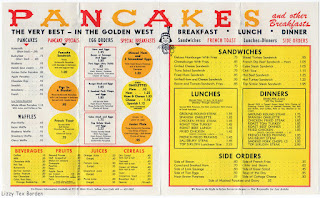 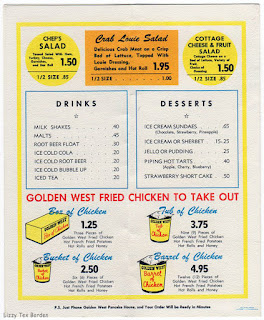 Now here is another little thing that I think is pretty
cool. I picked this menu up from Golden West Pancakes
sometime during the mid to late 1960's. I don't really know
if they are still in business or not. I love the design of this
souvenir menu and will you look at those prices? $4.95 for
a 12 piece bucket of chicken. Nice.

I have no idea if the cover would be offensive to anybody
these days. I left the scans BIG so if you would like to open
them in a new tab everything is easy to read.
Posted by Lizzy Tex Borden at 10:24 PM 0 comments