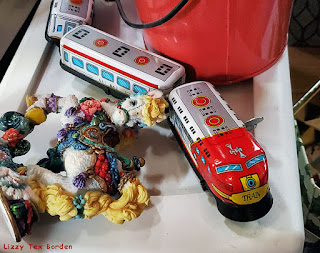 It is also the time of year for toy trains that
travel in circles around Christmas trees. 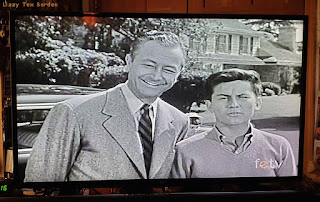 !!! TUESDAY BONUS PICTURE !!!
Guess what?! Pictured above is yet another "Father Knows Best"
episode that has Roger Murtaugh's house from the "Lethal Weapon"
movie series in the background.The episode was titled
"Betty Goes to College" and first aired in 1956. You are looking
at Robert Young as James Anderson and Billy Gray
as the young Bud Anderson.

I believe that this location was also Gidget's (Sally Field, "Gidget" 1965-1966)
home as well as the Baxter home from the "Hazel" (1961-1966) television show
starring Shirley Booth. But as I wrote before, it will always
be Lethal Weapon for me.
Posted by Lizzy Tex Borden at 11:00 PM