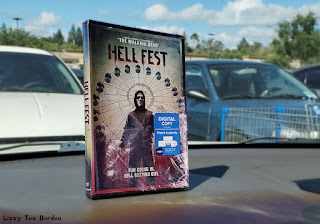 I have been wanting to see "Hell Fest" since it came out in late
2018, but they were charging a LOT for it. I didn't want to pay
that much so I waited. And today? Walmart? Five dollar bin. Mine!

When this movie was first released, people were all OVER it. But
in the year and a half or so since, it has gotten mixed reviews. I watched
it and thought it was fun. The atmosphere was pretty dang good.
Totally worth five dollars. No.spoilers.

Oh, one other thing. The sticker on the front of the DVD case
states that it includes a free digital copy. There was no code
anywhere. I was ripped off for that.

Looks like inclement weather coming in and
at  El Rancho De La Tex we bring our
beautiful flag in when it rains.
Posted by Lizzy Tex Borden at 11:30 PM

I thought Hell Fest was pretty good also, it was a little unique.

Hey... I'm glad to see that somebody else liked it. I've seen a few other movies that tried to capture the same atmosphere and failed. I actually can't wait to watch this one again in a few years when I have forgotten a lot of it.

Thank you for being here....