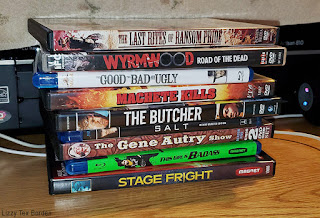 Seeing as how it is the week of my Birthday Extravaganza
for 2021 I did something I never do: I went to town on a Saturday.
It paid off a little as I found some okay movies at two Big Lots
stores. I bought yet another copy of "The Good, the Bad and the
Ugly" on blu-ray because it has some extras that other copies do not
have. Five dollars for a CLASSIC on Blu-ray is pretty good.

And seeing how it is my "splurge week" I bought this
restaurant turner that I have been wanting for a year or two.
THIS... is exciting.
I still have a few days of extravaganza left.
Posted by Lizzy Tex Borden at 11:00 PM