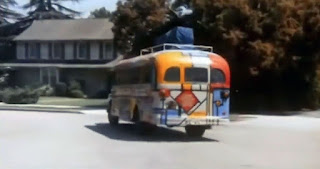 Another sighting of Roger Murtaugh's house from the Lethal Weapon
movie series. Roger's house is on the Warner Ranch lot in Burbank,
California. This sighting comes from the television show called "The
Partridge Family" (1970-1974). Way before Lethal Weapon, but this
house DOES go back a long way.

Here you can see the Partridge Family bus driving by the home
headed to another groovy gig (the Partridge Family is a band FYI).
Not a great picture. It was a screen shot from a news story. Best
I could do. But it's ROGER'S house so it's gold!
Posted by Lizzy Tex Borden at 10:30 PM