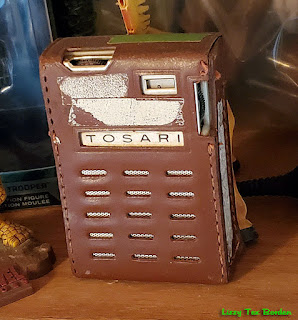 This is my Tosari transistor radio. When I was young a friend of
my mom made a device that would hold this radio to the handlebars
of my bicycle. I used to ride all over (and mean ALL OVER) the city
listening to Red Rubber Ball by The Cyrkle on AM 93 KHJ Boss Radio
out of Los Angeles, CA.
You can still make out some of the psychedelic green black light tape
that I put all over it. Happen'n days, man. Happen'n days.
Posted by Lizzy Tex Borden at 11:12 PM 0 comments 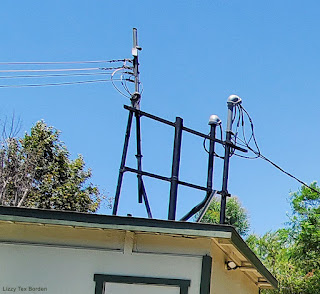 I do not know much about these things, but
this would tend to make me a bit... nervous.
Posted by Lizzy Tex Borden at 10:48 PM 0 comments

~ Chapter One, The Chair ~
I REALLY need a new chair for my desk. My older chair
broke and almost knocked me on my butt in the process.
I went to Staples (office supply store) and looked around.
I ended up buying the gray chair you see in the foreground.
~ Chapter Two, Oh The Pain ~
After getting it home and putting the thing together it just
didn't work out for me... at all. The lumber support KILLED
my back and it wouldn't recline at all. Oh well.
~ Chapter Three, The Return ~
Staples let us know that we can return The Chair to them within
14 days of purchase, with receipt (always) and if disassembled.
My son was a huge help with ALL of this and I was eventually
refunded my $$$s in full.
~ Epilogue ~
I dislike returning things and in the last 20 years it has been
necessary for me to do that only a couple of times (defective
items). As for the chair? I still REALLY need one and will try
again sometime down the line.
~ The End ~
Posted by Lizzy Tex Borden at 11:51 PM 0 comments 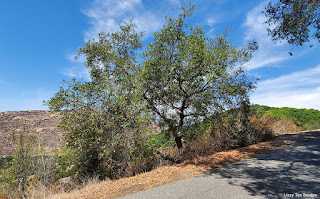 I love these trees.
Posted by Lizzy Tex Borden at 11:30 PM 0 comments 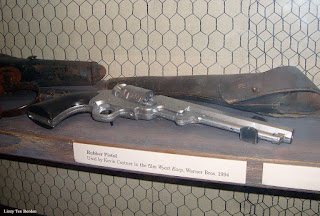 I thought I had shown this before, but apparently not,
so here she is! From my 2010 visit to the Gene Autry
Western Heritage Museum in Griffith Park, California.
This is a rubber prop pistol used by Kevin Costner in
his movie "Wyatt Earp" (1994).

Movie props are a trip.
This display is no longer there. The pistol MIGHT be
in another section of the museum, but this area was
torn out. BOO. Sadly, I don't think that The Autry is
what she used to be, but I will still visit when I can.
Posted by Lizzy Tex Borden at 11:00 PM 0 comments 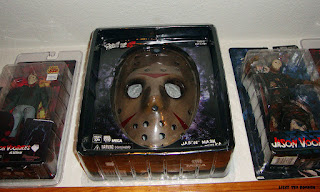 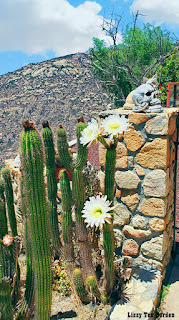 When it's roundup time in Texas, and the bloom is on the sage.
Then I long to be in Texas, back a-ridin' on the range.
Just to smell the bacon fryin', when it's sizzlin' in the pan.
Hear the breakfast horn in the early morn, drinkin' coffee from a can.
~ Nat Vincent & Fred Howard ~
Posted by Lizzy Tex Borden at 11:32 PM 0 comments 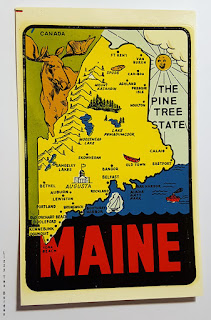 I used to collect decals from the states and
places we visited. This is from one of our visits
to Maine sometime around 1966.
Posted by Lizzy Tex Borden at 11:00 PM 0 comments 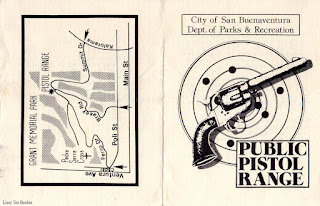 This is an old pamphlet for a shooting range I used to frequent
in Ventura California in the 80's and early 90's. It was located more
or less in the mountains and was a really nice place to shoot. There were
two ranges separated by a concrete wall. One side was for police training
(you should have HEARD what would come from that side of the wall) and
the other side was for us, civilians.
Other than the occasional grumpy
rangemasters, this place was perfect. 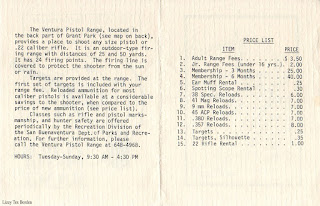 Look at this! $3.50 to shoot not for an hour or two, but for the entire
day, and your first set of targets were included in that price. Wo. And
$6.00 for 50 rounds of .38 Special reloaded ammunition, and I never
had an issue with any I purchased. Dang good.

The range closed I think in the late 90's?

Unfortunately I have no pictures of the range as we
did not have cameras every place we went like we
do now. The best I could do is a Google aerial capture
of what the place looks like now-a-days. Sad. It used
to be beautiful.
Posted by Lizzy Tex Borden at 11:15 PM 0 comments

Whoever is responsible for this reads
waaaaaaay too much Dr. Seuss.
Posted by Lizzy Tex Borden at 10:38 PM 0 comments

A little out of... no, make that a LOT out for character
for me, but I bought "Major Payne" because I saw a bit
of it on the Internet. A bit of a touching moment and it
hooked me. Probably a big mistake. We will see.

...later that night.
Wow. I actually did enjoy this movie. It made me laugh a bit.
I was surprised to find myself anxious to see what would
happen next instead of looking at my watch for an hour and
thirty-five minutes. I have always liked Damon Wayans, but
I am generally not a comedy person. Anyway. I rate Major Payne
6.5 out of 10 Push Ups. I would recommend this movie.
Posted by Lizzy Tex Borden at 11:30 PM 0 comments 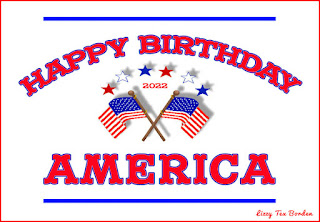